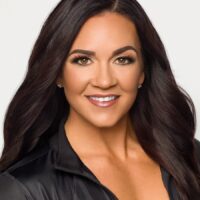 When you think of a woman who is a positive role model, Mom, entrepreneur, who puts her heart into anything she does and dedicates herself to her purpose, is an “All American Athlete” and all around awesome person to be around, who do you think of?

“My goal in life is to teach and lead by the quality of my example for others, my children, clients and everyone you touch in life.”
– Jessie Adams on the QCFF Podcast

It may seem this woman is a fierce sight to behold… and she is. Have you ever met Jessie Adams, CEO of BelieveinU Fitness? You’re about to learn all kinds of things you may not have known about our QC icon.

Having competed on American Ninja Warrior, CMT’s Broken Skull and with features in newspapers, magazines, 6-week fitness and transformation challenges and so much more as she coaches people from around the world on believing in themselves, overcoming life’s challenges, and never giving up.

Jessie grew up here in the Quad Cities. Her path towards fitness started at an early age. She laughs when she tells the story of her health journey because she was just 5 years old when it began. With her father being a Vietnam War vet, Chief of Police and powerlifter, the knack for discipline in the gym and life, caught on. Competition was a welcomed way of life at home and soon, it caught on and evolved in high school. But in her 20’s Jessie found herself, not herself. Pregnant and in a broken relationship and feeling broken herself, Jessie had a huge defining moment when her ex packed his bags and left. It drove her to take massive action and change her life for good.

“I never wanted my kids to see me give up on life when life gets hard.”
– Jessie Adams on the QCFF Podcast

Hear more of Jessie’s story and her contributions in the book “The Successful Spirit: Top Performers Share Their Secrets to a Winning Mindset” available on her website and on Amazon.

Deciding to never fear failure again, she used her life experience as fuel to fire her career as a trainer, a gym owner, a firefighter and competitor on national reality TV shows. Focusing on mindset and simplicity in your health and healing journey, Jessie is kicking off her biannual, 12- week transformation challenge on January 10, 2022. It’s one of her largest events of the year. She’s teamed up with two local businesses (Prep-to-Table and Optimal Nutrition/Downrange Supplements) that help with meals and supplements for those who have joined.

Having competed on American Ninja Warrior, CMT’s Broken Skull and with features in newspapers, magazines, 6-week fitness and transformation challenges and so much more as she coaches people from around the world on believing in themselves, overcoming life’s challenges, and never giving up.